As a designated Heritage Area in Dorchester County, Maryland, the volunteers at Handsell were pleased to join in the celebration of the county’s 350th Anniversary in 2019.  COVID 19 through us all off balance as we cancelled all events in 2020.  Now as we focus on the continued restoration of the brick house at Handsell, we look forward to a time when we are all safe, healthy and ready to get back to normal.  While we may not see you until spring or summer of 2021, we invite you to explore these pages to learn about our event and participating or attending this October 2021.

We are still in the planning stages, so come back frequently for updates.

The Preservation of Handsell and our three century historic interpretation period gives us a wide range for interpreting the history of Handsell from the Native People to the African American enslaved and sharecroppers and including colonial settlement.  Through historic craftspeople, docents in period dress, open hearth cooking demonstration by African American interpreters , Native life skills and the history of the Eastern Shore waterways, visitors can immerse themselves in over 350 years of history.

Thank you to Shane Walker of WBOC Radio 106.3 Interview to Promote the 2019 Jamboree!  LISTEN NOW

Every year at this all-day family-friendly event, you can learn from and be entertained by our outstanding Living History Performers.   In 2021 we have an exciting schedule planned:

Returning in 2021 in the restored Handsell Kitchen:  Jerome Bias, a living history interpreter portraying an enslaved cook.  Mr. Bias will discuss how African traditions and food preparation influenced early American cooking and talk about the life of enslaved people. 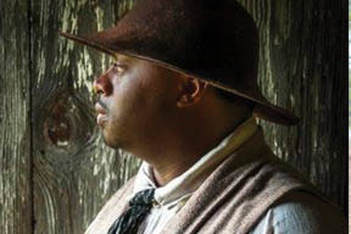 Edward Hector was an African American soldier who served in the Revolutionary War. He served as a teamster (a wagon driver) and a bombardier (part of an artillery crew) with the state militia called Proctor’s Third Pennsylvania Artillery, which by the end of 1777 became the Fourth Continental Artillery.  The known battles he participated in are the Battle of Brandywine (September 11, 1777) and Germantown (October 4, 1777).  In the Battle of Brandywine he disregarded his orders to abandon everything and retreat. He is remembered for replyi to the orders, “The enemy shall not have my team; I will save my horses and myself!”

Returning to the Jamboree again in 2021